Chloe Flan[2] is a supporting character and Sabrina's best friend in Sabrina: The Animated Series. She is voiced by Cree Summer.

In the first episode, it's already guessed that Chloe knows about Sabrina being a witch. Chloe's main friends are Sabrina, Harvey, and Pi. She is usually involved in one of Sabrina's magical schemes, and she's Sabrina's voice of reason. Although she hates being used in Sabrina's schemes, in one episode Chloe admits she "loves it when they use [magic]". Chloe has also been the subject of many spells such as: being shrunken, going back in time, and being turned into a mermaid. Like Sabrina, she also hates Gem Stone. Chloe always will be on Sabrina's side whenever she needs it.

In Sabrina's Secret Life, she moved away, resulting in her being replaced by Maritza as Sabrina's best friend.

Chloe is a 12-year-old Black girl with brown dreadlocks and styled into a ponytail, thick eyebrows, and full lips. She wears blue-colored contact lenses, a button-up vest that matches her contact lenses, a gold necklace, gold earrings, black capris, and leather sandals with white straps.

No Time To Be A Hero

Anywhere But Here (picture only)

Once Upon A Whine

I Got Glue Babe

The Importance of Being Norma

My Stepmother The Babe

This is Your Nine Lives

Send In The Clones

What Becomes of The Broken Hearted?

Wiccan of The Sea

Key to My Heart 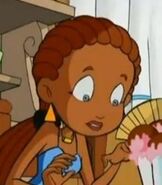 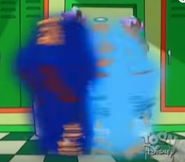 Retrieved from "https://sabrinatheanimatedseries.fandom.com/wiki/Chloe_Flan?oldid=15307"
Community content is available under CC-BY-SA unless otherwise noted.